History of All Saints Episcopal Church 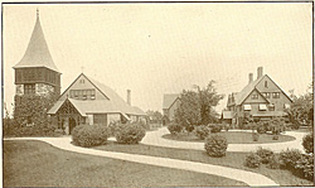 Church Exterior, 1906
All Saints' Episcopal Church, the oldest religious institution in Great Neck, New York, was built in 1886 when Great Neck was a wealthy community of estates, farms, and a tiny village located at the end of a peninsula.  The land upon which the church was built,  Regan’s Hill, was given by the Messenger and Gignoux families.

No expense was spared in making the small church a handsome, substantial edifice.  The architects designed it to look like an English rural church.  The grey stone used in its construction was found on the property and in nearby fields. 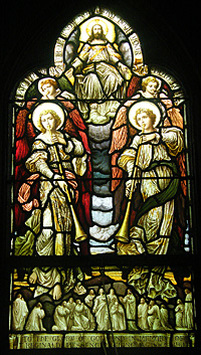 The church’s many other stained glass windows were imported from England.

Dr. Silas McBee, a well known churchman, supervised the beautification of the interior of the church.  The carved wood rood screen, the reredos and the niches above the altar, peopled with saints associated with the history of the Anglican Church.   The altar and the choir stalls were all exquisitely carved in quarter sawed English oak by the renowned artist, John Kirchmayor of Oberammegau, Germany.
The church’s early parishioners included many well known in local history. Most of them now lie in the hilly, wooded eleven acre churchyard adjoining the church.  It is also the final resting place of the Rt. Rev. Abram Littlejohn, the first Episcopal Bishop of Long Island.  The specimen trees and rare plantings in the churchyard came from the estates and greenhouses of the parishioners.

By 1900, the rectory and a parish house connected by cloisters had been added.  In 1934, the Barstows gave the money to build an additional parish house to provide classrooms, a large auditorium, a pipe organ, a modern kitchen, a boiler room and a heating plant.

More recently, the cloisters were restored and most of the old parish house was remodeled.  Three large elegant rooms were designed to be used for meetings and receptions.  They were dedicated to Father Gary E, Maier, the fourth rector.

Since 2010, All Saints' congregation has been part of a Diocese of Long Island collaborative ministry initiative named the Great Neck Episcopal Ministry (GEM), served by GEM Missioners appointed by the diocesan bishop.  GEM initially included the congregations of All Saints, St. Joseph's and St. Paul's Churches in Great Neck.  In 2011, St. Paul's congregation became part of All Saints.
Click here to learn more about GEM.

In March 2013, at at joint mission retreat, both All Saints and St. Joseph's leadership groups agreed to becoming 2 language speaking communities in 1 church with shared finances, with shared leadership, with shared mission and with shared programs (as appropriate based on language).  On December 8, 2013 a joint GEM Service and joint Annual Meeting was held to elect the new joint All Saints Vestry.  On March 1, 2015 the Vestry unanimously voted to call The Rev. Canon Joseph S. Pae as Rector.
On November 8, 2015, The Rev. Canon Joseph S. Pae was installed as the 7th Rector of All Saints by The Rt. Rev. Lawrence C. Provenzano, Bishop of Long Island.